A note to the CVI Power Foundation,

Thank you once again for your donation to Sustainable Tahoe and the 2011 TahoeExpo. Your investment in ST helps to spotlight and connect models of success in Lake Tahoe environmental and economic sustainability. With each donation, you’re proving your commitment to creating an environment where the public, organizations and businesses profit from protecting your surroundings.

Barbara Dewes Makes a Donation to the American Red Cross

Whole Foods Market CEO says that having a larger purpose than just the bottom line is good for business. 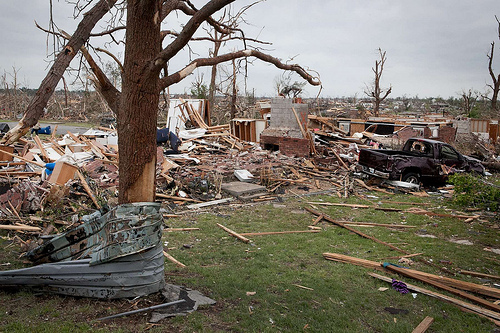 After another round of severe weather in the Midwest, the American Red Cross has expanded relief operations into Oklahoma, and is continuing to ramp up services in Joplin, Missouri.

As tornado warnings were broadcast Tuesday evening, the number of people staying in the Red Cross shelter at Missouri Southern State University jumped to 348 people triple, the number the night before.

“This is a really tough time for everyone in this community,” said Charley Shimanski, senior vice president of Red Cross Disaster Services, who is in Joplin. “It’s going to be a long road for this town and for the many other towns that have been hit by disasters this spring. The important thing to remember is that the Red Cross will be there, and that we will get through this together.”

“This has been a rough disaster season with so many deadly tornadoes and disasters striking one after another for several weeks, and we’re grateful for contributions from donors which support the Red Cross response,” Shimanski added.

Corporate Visions has made a donation to the Red Cross to help support these disaster relief efforts.   In addition to our corporate donation CVI Power Foundation will match any donation made by our employees. Our thoughts and prayers are with the people and families affected by this disaster.

How You Can Help

The Red Cross estimates that it will spend as much as $41 million responding to the disasters that have affected the country since March 31, and to date, about $33.6 million has been raised in donations for these responses.

Those who want to help can make a donation to support American Red Cross Disaster Relief. This gift enables the Red Cross to prepare for and provide shelter, food, emotional support and other assistance in response to disasters. Visit www.redcross.org or call 1-800-RED-CROSS; you can also text the word “REDCROSS” to 90999 to make a $10 donation. Contributions may also be sent to local American Red Cross chapters or to the American Red Cross, P.O. Box 37243, Washington, DC 20013.

A Note From Sean Leahy

A Note from Sean Leahy:

On November 20, 2008…..I witnessed two of my very best friends,… holding their almost-five-month-old-child in their arms at a hospital in Brockport. They were grieving. Everyone around them was grieving.

Their son Grant had passed away of SIDS just hours earlier that day. I had seen and experienced loss before,..but never anything like that.

Today,… 2+ years later,.. the story of Grant and his parents, Mike and Alana,…. is still heartbreaking and no less tragic,….but their story is now filled with hope, love and healing. Muler (the rock band that I play drums in) and Carbon Records (Thank you VERY much Joe Tunis!) have co-conspired on this recording / fundraising effort,….. focused on helping < 1 year old children and their parents avoid SIDS, and helping those impacted by SIDS,…to cope and carry on as best as possible. People don’t talk about SIDS because it’s so freaking scary. Having had dear friends experience this tragedy,….I’ve learned that it’s actually much scarier,…and fatal, not to talk about SIDS.

The paradox of SIDS is that it is both unavoidable and avoidable. Truth be told…….there are things you can do to reduce the likelihood of SIDS…..for example:

-Avoid letting infants sleep on their stomachs,.. even if they like it, and even if you’re an exhausted parent and it’s the only way to get some sleep.
– Avoid putting infants to sleep in clothes that are TOO warm.
– Avoid a bunch of blankets, and cheap crib bumpers that may increase chances of suffocation.

But here’s the big mind blower (at least for me)………Mike and Alana did EVERYTHING right,….they followed ALL the “rules”, and still,…. Grant fell victim.

Here’s the big takeaway………You CAN choose to minimize the likelihood of SIDS by understanding it,… and even if YOU don’t have children,…by learning a little more about SIDS,…you may very well be able to help someone you love avoid tragedy. By understanding SIDS,…you’ll also be in a much better position to have compassionate, supportive dialogue with anyone you know who may be coping with the effects of SIDS.

Muler and Carbon Records hope this project helps with this difficult,….must-have conversation.

Muler and Carbon Records paid for this project in its entirety,…so every dollar spent (donated), goes directly to http://www.facebook.com/pages/The-Grant-Fund/267512884475
In a world where the price of music is embarrassingly low,….you can purchase this record for as much as you want….and every dollar will go toward the cause.

Thanks for your attention.

PS..”Thank you” to Joe Terry, the CEO of Corporate Visions, for pushing me and our entire team at Corporate Visions to pursue not only excellence in business, but also pursue our individual passions,…and above all,….serve others.

337 Americans were killed in the Alabama tornado and tons of other families displaced. The neighborhoods most affected were generally lower income; families that don’t necessarily have the savings to easily recover. I’ll always remember a news clip of a guy describing how he had to physically hold onto his dogs’ collars to keep them from being sucked into the storm… that’s a visual you can’t get out of your head.  – Jeannie Frantz

We live in such a beautiful, sheltered place here in Tahoe.  It’s easy to be oblivious to the natural disasters happening around us.  However seeing the pictures from the Tsunami and recent tornado destruction in the US…it’s heart breaking.  In addition to praying for the victims, donating money to relief efforts is the least I can do.  I know every little bit helps. – Sarah McMahan 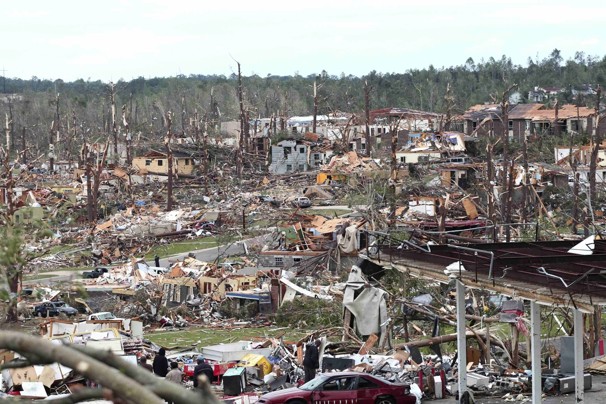 Severe storms wreaked havoc across the South on April 27, causing widespread damage and tremendous loss of life. The storm system spawned tornadoes that wiped out homes and businesses, and left hundreds of thousands of people without power. More than 340 people were killed, including at least 250 in Alabama.

Corporate Visions has reached out to support relief efforts in Alabama through a donation to:

In addition to our corporate donation to Samaritan’s Purse relief efforts, CVI Power Foundation will match any donation made by our employees. Our thoughts and prayers are with the people and families affected by this disaster.

Ways to Donate to the Tornado Relief Effort:

The Red Cross is providing relief to people across the hardest-hit states, providing shelter, and relief to survivors.

To make a donation to the American Red Cross Disaster Relief, visit its online donation page.

The Salvation Army Emergency Disaster Services is responding to the deadly tornado activity throughout the South, mobilizing feeding units and providing support to the victims.

To make a donation to Feeding America, visit its online donation page.

The Fund, part of the Alabama Governor’s Office of Faith-Based and Community Initiatives, provides additional recovery assistance to Alabama residents who have exhausted all other coverage provided by relief organizations, government programs and insurance. To donate, visit the online donation page.

On March 11, 2011 at 14.46 (local time), a magnitude 8.9 earthquake struck 81 miles (130km) east of Sendai, the capital of Miyagi prefecture (Japan), followed by a 13 foot tsunami. We are deeply concerned about the devastating impact caused by the earthquake and tsunami.

Several organizations are offering support to help victims of the Japan Earthquake and Pacific Tsunami relief. Here are a few ways you can help:

Susan Trumpler has donated to her most rewarding charitable organizations (Honduras Rescue Mission and Arise Africa). Both are focused on children in third-world countries having what they need to become productive citizens – basic food, shelter, and education. She believes that every child born has the right to use their gifts to make a contribution to the world – but as Maslow’s Hierarchy of needs so clearly depicts – they can’t achieve self-actualization until their most basic needs are met.

Susan says, “Thank you so much for making community and world outreach a priority for our company and for the generous match that will be made. It makes me very proud to be an associate.”