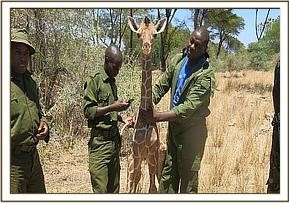 For part of Amy Merrill’s Project Manager of the Year award, the CVI employees and Amy are fostering Kiko, an orphaned giraffe at the David Sheldrick Wildlife Trust in Kenya. Though Amy fosters two orphaned baby elephants, Ndotto and Mwashoti, she decided as a group to foster Kiko.
The goal of the David Sheldrick Wildlife Trust is to save lives and eventually, after years of rehabilitation and guidance, for these elephants and other wildlife to live free in one of the protected parks in Kenya. Some elephant graduates come back to visit their keepers, even bringing back their new baby with them. This is a far cry from the humans they saw kill their mother and families in front of them for their ivory.

Kiko was found alone on Sept 19, 2015 estimated to be just one week old, and had been rescued by KWS rangers on the Meru National Park boundary. His mother was not found nor were there other giraffes seen in the area. This area is known for human wildlife conflict.
Quick Facts about KIKO

He was flown to the Nairobi Nursery by Sky Vet, sparing him what would have been a grueling and very hot seven to eight-hour journey by road. This was the first time The DSWT Keepers had been involved in the rescue of an orphaned giraffe; they were fully briefed about the necessity to ensure the giraffe’s head remained upright at all times throughout the flight. On this occasion the usual elephant-rescue tarpaulin had to be modified into a make-shift cradle and throughout the entire procedure the little giraffe was seemingly totally resigned to whatever lay in store for him. Sitting quietly with his neck sticking out, he calmly surveyed the scene, making no attempt whatsoever to break free as he was carried and loaded onto the plane. Airlifting him to Nairobi involved a one-hour flight, thus sparing him the grueling journey. Upon arrival at the Nairobi Nursery, he was still amazingly trusting and even affectionate, happy to fraternize with the men who had rescued him – the veterinary team, the pilot, the Keepers, or whoever else happened to be passing by.

He has been named Kiko, a name from Meru National Park where he was found, and he is now very much in the Nursery fold, not only with the company of his Keepers whom he loves but also some feathered friends in the form of Pea and Pod (orphaned ostriches) and the two latest little elephant arrivals. Both Weiwei and Loboito love to spend time under his belly resting their trunks on his side and neck, which he happily tolerates. Kiko is extremely playful these days with limbs splaying in all directions he hurtles around the car park and in the open forested glades letting off steam. For more information and/or to become a foster parent, please visit this website, you will be glad you did! http://www.sheldrickwildlifetrust.org/asp/fostering.asp